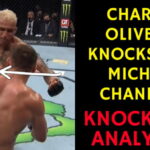 Charles Oliveira KNOCKS OUT Michael Chandler at UFC262 with a perfectly placed lead hook. He survived a tough first round only to end it in spectacular fashion early in the second. Michael Chandler is a tough fighter, but that lead hook had him reeling and Oliveira didn't let up with the pressure until it was over.In this video, I take a closer look at the technical details of … END_OF_DOCUMENT_TOKEN_TO_BE_REPLACED

We had some great fights the last few months and I wanted to go over some of them in this podcast. I cover many things you can use in your own training. And then also the segment about Ciryl Gane's defense I promised a while ago. Important: the Bonus Episode is available here. Enjoy! The links mentioned in this episode: How did Dustin Poirier KNOCK OUT Conor … END_OF_DOCUMENT_TOKEN_TO_BE_REPLACED 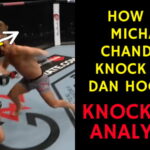 Michael Chandler knocked out Dan Hooker with a leaping left hook at UFC257. In this video I take a closer look at how he set that up and explain this latest example of the evolution of MMA and how (half)kneeling) range is still only in its infancy in the sport. A lot of people are still sleeping on it, but I can assure you that many MMA coaches are looking at traditional … END_OF_DOCUMENT_TOKEN_TO_BE_REPLACED