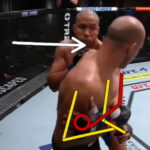 Cyril Gane first dominated and then knocked out Junior Dos Santos in with his striking during UFC 256 Figueiredo vs Moreno.There was some controversy over the final elbow, and I won't really get into that in this video, but I think it is fair to say Junior was on his way down. I will do a series of videos on Patreon on this fight as Gane's striking techniques and tactics were … END_OF_DOCUMENT_TOKEN_TO_BE_REPLACED