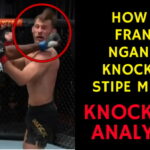 Francis Ngannou KNOCKED OUT Stipe Miocic at UFC 260 Night: Miocic vs. Ngannou 2. It was an intense fight in which Francis immediately had Stipe in trouble. But Miocic is a warrior at heart and he hung in there. In the second round, Francis put him away after first landing a huge left hand and then finishing the job with a beautiful left hook. And now we have a new … END_OF_DOCUMENT_TOKEN_TO_BE_REPLACED